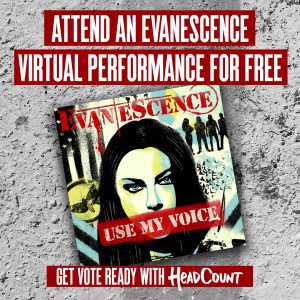 August 5, 2020 – Evanescence and HeadCount, the non-partisan, non-profit voter registration organization, unveiled a public service announcement today entitled USE MY VOICE along with a campaign to encourage Americans to check or update their voter registration status.

Watch the PSA, which features a portion of Evanescence’s upcoming anthem “Use My Voice” (out August 14th) as its theme music, HERE 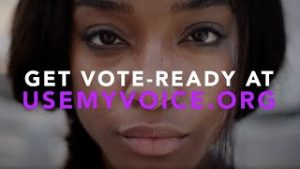 The USE MY VOICE initiative places special emphasis on empowering Americans to use their voice as safely and easily as possible in the upcoming election. It points voters to www.UseMyVoice.org, where they can get accurate, clear information on voting by mail. It also offers location-based instructions on where to vote, what’s on an individual voter’s ballot, and provides easy access to voter registration, where permitted by states.

As an additional incentive to encourage people to use the free service, everyone who

to attend a free, private online performance by Evanescence in the Fall.

Evanescence joined together with HeadCount after witnessing the COVID crisis’ dire impact on primary voting in many states, including long lines in places like Georgia and elsewhere, as well as the forced rescheduling of other primary elections. With the recent spike in Coronavirus infections throughout the nation, the band wanted to do something to address the concern. Sharing HeadCount’s belief that our democracy functions best when as many people as possible – regardless of their political preference – participate by using their voices, the band is dedicating itself to this cause by leveraging its reach to help in achieving HeadCount’s goal of registering 200,000 voters, and directly engaging with one million voters this election year.

Evanescence front-woman Amy Lee said “For many Americans, voting is too often an intimidating experience. We all saw the long lines in certain precincts in Georgia during their recent primary. Unfortunately, what happened there is not unique In America. It happens all the time, especially in underserved communities in our country. Now, add COVID into the mix and you have the perfect combination of factors to continue to suppress the voice of the people.”

Lee continues, “The USE MY VOICE campaign is about empowering people to use their voice at the ballot box. Promoting easy access to registration and voting is not a Democratic or Republican issue—it’s an American issue and one we should all promote because there’s nothing more patriotic than supporting participation in our democratic process.”

HeadCount’s executive director Andy Bernstein said of the partnership “We’re thrilled to collaborate with Evanescence towards our goal of registering 200,000 new voters this election year. Their strong commitment, enormous fan base, and 25 million-strong social media following will help us accomplish great things.”

“Use My Voice” is also the name of the exciting new single by Evanescence, out August 14th, from the band’s highly-anticipated upcoming album, The Bitter Truth (BMG). Previously released songs and videos “Wasted On You” and “The Game Is Over” have gotten early praise from The New York Times, Elle Magazine, Rolling Stone, and more, and the album – the band’s first of all new music in nearly a decade – is set to ignite a new fire for rock fans everywhere. Last week, the band’s video for “Wasted on You”, self-shot in March while the band was quarantined due to the COVID pandemic, garnered an MTV Video Music Awards nomination in the Best Rock category. View the video HERE.